(see more photos for this article)

After spending a night together at a lock-in at Base Camp, the Webelos Scouts from Pack 283 and the Scouts from Troop 283 (both in Wayzata) joined forces for the Amazing Race Challenge at Mall of America. 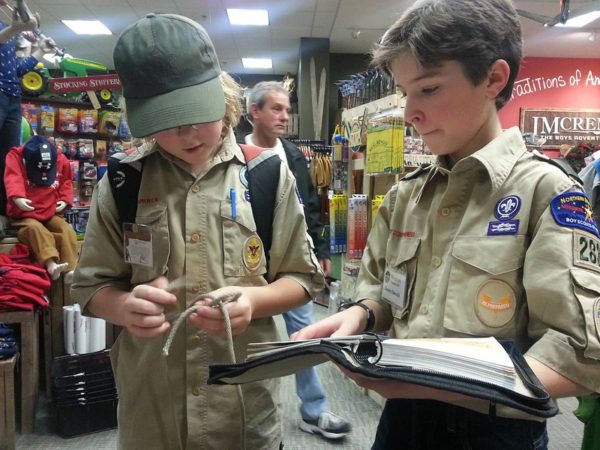 Six teams composed of a mix of Webelos and Scouts competed in a race which started at Base Camp and took them via light rail to Mall of America.  Their competition started with a tent set-up / tear-down at Base Camp and then they boarded the train.  At the Mall they participated in several challenges, reaching each destination by solving clues along the way.

Teams competed in dancing at the Microsoft Store; knot-tying at J. M Cremps; nerf archery at Air Traffic;  bowing at Sky Deck Lanes; took a quiz at Sea World; rolled silverware in napkins at Ruby Tuesday; and built a Lego tent at the Lego Store.  Their final stop on the race was the zip line at Nickelodeon Universe!

Each team of Scouts was supervised by an adult leader, but the tasks were completed by the Scouts on their own. The challenges were run by troop volunteers with assistance from the stores.  The team of Keegan S., Josh S., Zach S. Joe D., Ben B., Charile S. and Scoutmaster Stu Smith finished the race in just over two (2) hours. An award celebration was held at the Microsoft Store where the Scouts watched slide of the race on the store’s big screen.