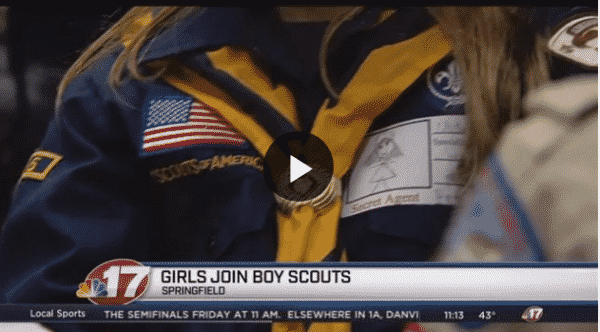 For Natasha, wearing the Cub Scout shirt is more than just donning a new uniform – the clothes hold a special meaning to her and her family. In fact, Natasha will wear the Cub Scout uniform that her father and grandfather wore decades ago.

Scouting is a family tradition for Natasha, but she also enjoys spending time with the other girls who are new to Scouting.

“I like to meet my friends that are in my troop,” Natasha said.

From Pinewood Derby to learning new skills, Cub Scouts invites both girls and boys to experience the character-building fun that Scouting has to offer.

“I wanted to get a lot of badges so I can show everyone,” said fellow Scout Angela G.

Although the girls are excited about earning badges, they know there’s more to Scouting than just badges – it’s about the life skills that accompany them.

“I wanted to try it to get over my shyness because I get really shy,” Cub Scout Angela explained.

Scouting volunteers are also thrilled to welcome girls to the program, as it allows them to invite whole families to experience the program as well.

The post Daughter Dons Her Dad’s Cub Scout Shirt as She Joins the Pack appeared first on Scouting Wire.

Posted in ~Archives and tagged Scouting-Wire